The Agricultural Technical & Vocational Education & Training (TVET) Conference, that held at NAF Conference Centre in Abuja on the 1st and 2nd of February 2022

An event aimed at bringing together experts and researchers from Nigeria’s food and nutrition sectors as well as the cashew sector, and create a space for healthy conversations and knowledge sharing on contemporary solutions to meeting increasing demands and challenges – in Nigeria and beyond.

The just concluded NAWORG induction of National EXCOs and State Coordinators that was held on the 27th January 2022 at the Lagos Chamber of Commerce and Industry House  (LCCI) ,  with the Theme: Position and Responsibility of Women in Chamber Movement.
The Keynote speaker was Toki Magbojunje, former president of Lagos Chamber of Commerce and Industry and the guest speaker – Nneka Onyekaru, World Bank Master Trainer and Assessor SME & Gender Specialist.

In her speech, Hajiya Aisha Abubakar the Current Chairperson of NAWORG stated:
“Gender equality remains a major issue despite its relevance, both as a human right and and as a catalyst for economic growth. This is why closing the gender gap is a central part of any strategy to create more sustainable and inclusive economies and societies.”
She went further to add that, “Recent efforts have led to important gains in women’s education and employment outcomes in Nigeria. However, women still reman severely under-represented in key, growth enhancing fields of education, business and government.

“First and foremost, we have to go on advocacy campaign for the gender equality Bill for it to be passed and we have to do for the individual for the domestication because it is one thing to pass the Bill, it is another thing to domesticate the Bill for the policy and it is a work in process.”

“We are also part of everything that is going on, so we just need to be there whether it is fiscal, monetary, whether it is security issues, education or health, whatever it is, we need to be there to put our voices.”
“We understand, we are the ones who carry the burden and backlash of all of these. So we should be there to guide and to say what the situation is.”
In concluding she beckoned on the Government to ensure that all our monetary and fiscal policies and everything align to sustain the value of the Naira. So, we just have to sure that our policies align to create that stability that we need in our country.” 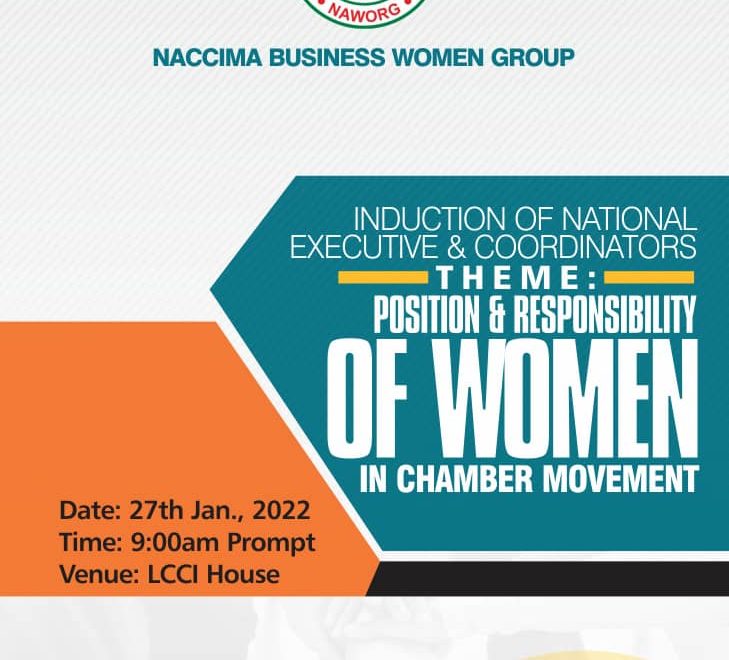 Invitation to The Induction of National Executives and Coordinators

Naccima Women Business Group cordially invites you to the Induction of National Executives and Coordinators!

With the theme: Position & Responsibility of Women in Chamber Movement

A Courtesy Visit of the NAWORG Chairperson, Hajiya Aisha Abubakar to the Managing Director of NEPZA, Prof. Adesoji Adesugba